Feeling pretty old. I'm a late night talk show nerd and I remember watching this the first time it aired. Ultimately, I think he was as good as Letterman.

It was brought to my attention that Home Movies first aired nineteen years ago. I already felt old, but now I'm guessing this song is starting to feel a little grey itself...


This is another track we recorded back in 2007 for 1994. Like most of the songs on that album, this is one we had been playing live for a few years by the time we recorded it.

This was a pretty straightforward recording. Nothing interesting to say about it, really. All that really sticks out in my memory is what a slog it was to program the drum patterns. There's a triple-slapback delay throughout that was very tricky to arrange around without the mix getting too crowded. The drums were programmed in Acid, burned to CD, then played through my CDJ so I could apply effects in real time. The delay is from a pair of Boss DD-20s chained together.

Of note is the last little looped sound that closes this song, and thus the album: it's a sample of some sound effect from the NES Legend of Zelda. But I can't recall what it was. If anyone recognizes it, let me know.

Check out the whole album 1994 over on bandcamp.com.

This is one we originally recorded back in 2007 for our first proper album, 1994. We'd been playing it live for a couple of years by that point. It started with us goofing around in practice with one of those jams where I drop a break record, Hughes punches out a bass line, and I start scratching a random vocal sample. This one has three tables going: the break beat, the noise guitar record (Chicago), and a monologue from the classic 2001 TV series The Tick*. I'm cutting that sample up on one of those old school Pioneer CDJs. These were the days before Serato.

We initially added it to the live set because it didn't require anything playing on the sampler, so I could switch cards on that while juggling the records without having any dead air. It also didn't require any special effects unique to any of the tables (key shifting, extreme pitch, etc.) so it didn't matter which vinyl was on the left or right table, which is important when planning out twenty minute routines with songs that do require the records to be on specific tables. Tracks like this one are like a blank Scrabble tile.

I figure since the new Tick series has just come out, I'd jump on the hype train and give this one a little juice. Check out the whole album 1994 over on bandcamp.com.


* Starring the perfectly cast Patrick Warburton of Seinfeld fame (You got a question? You ask The 8Ball.)
-- Phalen 10:21:00 PM 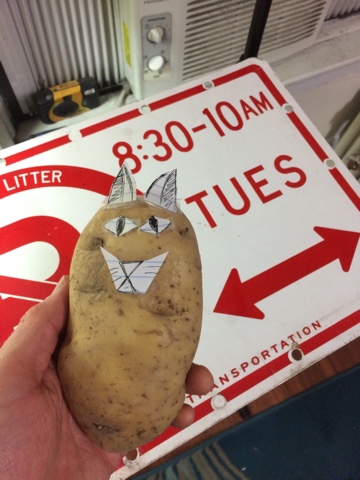 Testing out some props for our DEVO show this Wednesday 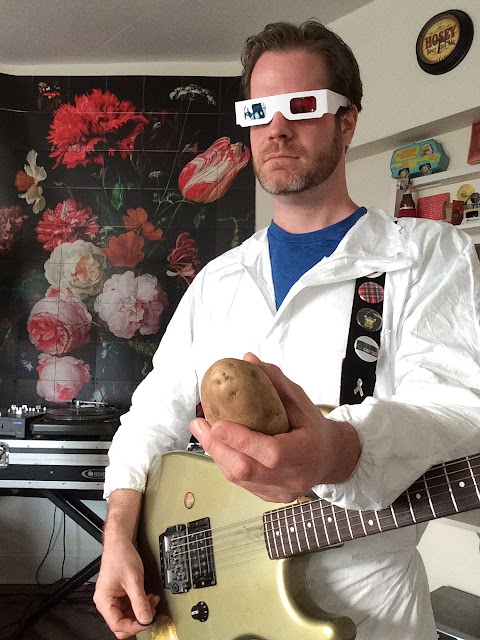 HOSEY does a Bunch of Devo Covers! 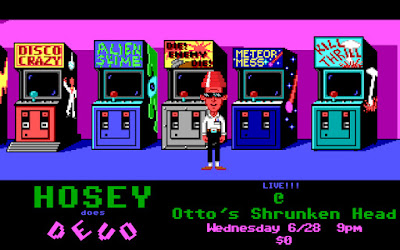 "We smashed the synthesizers to pieces and used the wires to string our guitars. It's a reasonable facsimile."

Hosey brings you a grip of reimagined* Devo songs, on a night hosted by DJ Xerox of Copycat fame. Experience the sounds of Mothersbaugh and the "Whip It" boys filtered through a haze of breakbeats, ZZ Top, and your older brother's choicest hash oil.

Back in the '90s, learning the main riff from "Outshined" was step one for every kid who picked up a guitar. Chris Cornell easily had one of the best voices in the history of rock music, but he was also a wildly inventive guitarist alongside Kim Thayil. Most people don't realize that nearly every Soundgarden song is in an odd time signature because they flow so smoothly thanks to Cornell's skill at lyric melody and arrangement. Most of us didn't even realize we were head banging in 7/8 time. He was truly one of the greats. 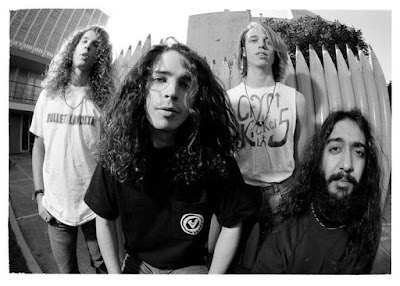 One of Those Ten Things Lists...

Ten numbers that are real, and one is imaginary! Spot the fake!

Musician in NYC... for now.

Sometimes I write words.
This is the place for that.